Video: New research on how design can build competitive advantage

PA Consulting’s US Design and Engineering Lead John Edson speaks with Innovation Leader’s Kaitlin Milliken and Scott Kirsner about how members of the C-suite can support design. They also discuss the role of design in large organizations. 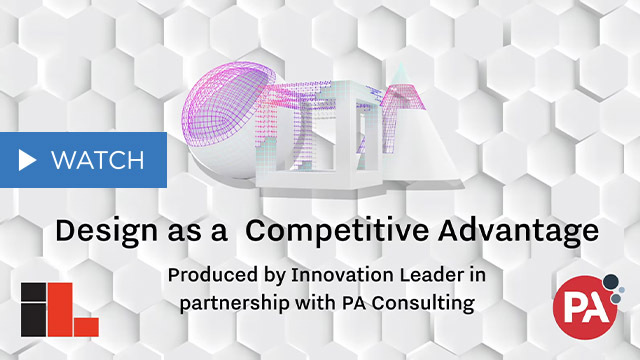 New Research on How Design Can Build Competitive Advantage

Click here to watch the full Innovation Leader video. A transcript of the segment is below.

Kaitlin Milliken: Hello, and welcome. I'm Kaitlin Milliken from Innovation Leader. I'm joined by my colleague, Scott Kirsner to talk about how design can help innovation teams level up their products and services. I know Scott, you've done some research on the subject and have some original data, both with good news and bad news. Let's start with the good stuff.

Scott Kirsner: We surveyed more than 100 people who are in innovation strategy in R&D roles about the role that design plays in their organization. And starting with the good news, it does seem like in a large number of organizations, design is brought in either at the very early ideation concept stage, about 30% of people said, that design gets involved at that ideation stage. 30% said that design is involved really at every stage of the development of a new product or service or offering. So that seemed to me like some pretty good news.

Kaitlin Milliken: I sat down with John Edson from PA Consulting, one of the sponsors of this project, who said something really similar about when design should be incorporated into building something new.

John Edson: It's really important to get design distributed across a development process, from identifying what a new product or service might be, all the way through to launch. Getting design out of it’s design phase silo is crucial. So that's the question, how do we how do we do that? I'm seeing companies that are putting in metrics for Chief Product Officers around customer satisfaction. So part of your reward is not just how much you're selling, but how much you're connecting with your customers. I've also seen at lower levels of personnel reviews being built around, 'how much are you trying new things? And how much are you failing?' As in as much as how much are you succeeding to build in the expectation that there's going to be more churn, we're going to come up with more ideas, we're gonna try out more things, and there's not penalty for failure. But on the converse side, there's actually a reward for failure, because it means you're trying new things and breaking stuff, as Facebook says.

Kaitlin Milliken: Alright, Scott, we talked about the good news. So break it to us gently, what's the bad news?

Scott Kirsner: Well, the bad news is really about senior leadership and how they're seen as connected to design. So about 41% of our survey respondents said the C suite doesn't really have a very defined role when it comes to design in our organization. And then we asked the question a different way, we said, who really leads design in your organization, and about 21% of respondents said, there isn't a clear design lead, no one owns it, no one is the design champion. And so when you think about companies like Tesla, or you've got Elon Musk, and Apple, where you had Steve Jobs as a clear design champion, maybe other companies like Best Buy, where you have Corey Berri as the CEO, it really feels like maybe that's a missed opportunity for the C-suite to say we're going to use designed to differentiate our company and really set us apart from the pack.

Kaitlin Milliken: And let's get John's take as well.

John Edson: The C-suite is incredibly important in creating real focus on design and real importance of the customer within the organization. And the converse is also true. I've seen for decades in my career, when great design shows up it can be killed or sidelined by other actors in the organization who have their own objectives. And, you know, a CFO can say, well, we shouldn't really be spending money on that. And completely derail opportunities, that design has to create distinctive products in the market for that company. I think we've gone through kind of 100 years of walking away from customers and thinking about the optimization of a company thinking about how we can crank more profit out, reduce costs, and just take advantage of the soap that we're selling, and the marketing that's making that soap sell. And we're moving into a period of time because of the transparency, the internet and other things, that it's really important that we are making products and services that matter to people and creating that one to one kind of relationship between company and customer. It's got to be on the agenda of the CEO and the C-suite. And design is a really important driver. It's kind of the heart and soul of commerce, connecting a company's output to other customers.

Kaitlin Milliken: If you're looking for more information on what role design can and should play in your innovation effort, check out our website innovationleader.com. Have a whole series with articles, interviews, podcast episodes and more videos to help you leverage design at your organization. Thanks for watching and we'll see you soon.

PA Consulting and PulPac launch the Blister Pack Collective.
In the media

Jonquil Hackenberg, Head of Sustainability at PA Consulting, discusses having sustainability objectives during the cost of living crisis.
Press release