The undeniable opportunity of sustainability

When talk turns to sustainability, it’s sometimes hard to see positives. The barriers can seem too high to scale, whether it’s plastic-choked oceans, dwindling resources, or climate-driven flooding and burning rainforests.

At the same time, there’s undeniably an opportunity here for business – if they’re ready to take it. Business is pivotal to sustainability, from how it gets and uses resources and moves its goods through their entire life cycle, to how it treats employees and shapes customers’ behaviour. It can take the lead in creating a positive human future. As we’ve identified in our own leadership agenda, it will mean building organisations that pursue growth while respecting social impact, engaging their people and contributing to a healthier planet.

Investing in hope, not crisis

But there can be no half measures. At the UN Global Compact Leaders Week 2019, New Zealand’s Prime Minister Jacinda Ardern told businesses that ‘no one has the luxury of copping out’ of the climate change challenge. They must have the optimism to look beyond the transition to a low-carbon economy as a sunk cost and a crisis to avert, and see it instead as an investment. The cumulative ambition of business could have exponential rewards, she said, and encourage governments to increase their own ambitions – creating ‘ambition loops’ of businesses and nations spurring each other on to achieve greater outcomes.

Looking at sustainability more broadly, we believe she’s right. Globally, work towards the UN’s 2030 Sustainable Development Goals will be worth $12 trillion a year, from combatting hunger and making cities more liveable to boosting health and education. Even conservative voices are realising it’s time to rethink business’s role in the world. Business Roundtable, the lobbyist for corporate America, recently changed its tune to advocate a switch to ‘stakeholder capitalism’ that supports the interests of employees and communities, not just shareholders.

The less good news is that slow, incremental progress is not enough anymore. More rapid advances and breakthrough innovation are increasingly what’s needed. But here again, success is possible, and happening already. Also at the UN Global Compact event, Anand Mahindra, Chair of the Indian multinational Mahindra Group, talked of his business reaching its three-year sustainability goals in just one year. Three new businesses based on renewables, electric vehicles and waste energy – all leveraging breakthrough technologies – are all profitable and among the group’s fastest-growing, he reported. “And that’s what’s led us to declaring we’ll be carbon-neutral in all our companies by 2040,” said Mahindra. A strong sense of purpose has made the group a magnet for similarly motivated young people who, he added, “jump out of bed every day and rush to work.”

Governments can nudge businesses with the right incentives and trade deals. But it’s this can-do positivity and sense of ambition that will mark out the winners here. We’ve seen this in businesses we’ve worked with, whether it’s Virgin Hyperloop’s radical transport vision, the renewable paper pulp alternative to plastic packaging developed by start-up Pulpac, or helping energy and utilities networks make the transition to a low-carbon economy.

What should make business optimistic about this challenge? One major factor is technology, which promises to be the bedrock of sustainable change. IT currently accounts for a fifth of the energy the world uses. But quantum computing will eventually run on a tiny fraction of that. Renewable energy supply has developed so fast that this summer the UK delivered more energy from these sources for one day than from non-renewables. Ten years ago, this would have been unthinkable. Now, accelerated cycle times means that what once would have taken decades can now be achieved in months. It’s change at this pace that’s led our CEO Alan Middleton to say that this generation’s legacy will be that it “made business better”.

We shouldn’t understate the size of the task. The world produced 350 million tonnes of plastic in 2017, and only around nine per cent of all plastic ever made has been recycled. And this is just one sustainability challenge we face. Renewable energy, while growing fast, won’t cut greenhouse gas emissions fast enough to keep global heating in check. 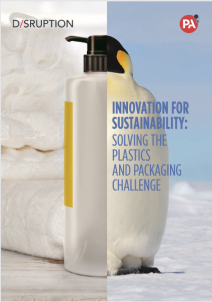 It’s time to get serious about sustainability – to unlock trillions of pounds worth of commercial opportunities and create a positive human future.

We need more, including the switch to a circular economy that designs out waste, keeps materials and components in use and regenerates natural resources. Here again, business has the power to bring about this shift in how we make and use goods and produce food. And it stands to reap the rewards. The Ellen MacArthur Foundation estimates the circular economy will be worth €1 trillion by 2025 in Europe alone. Not only that, but businesses stand to cut their operating costs, deepen service relationships with consumers and the loyalty of staff, and make finite resources go further.

By acting with optimism and seeing sustainability as an investment, leaders can sow the seeds for future success and unlock exponential rewards.

The message from COP-27 marked a shift from mitigation and prevention of climate impact – to dealing with the consequences of emissions down the line. So where does this leave energy transition and how should businesses respond?
Insight