It looked like a straight forward task. Investigate ways for the transmission system operator, rather than the developer, to pay the connection fees for offshore wind farms in Sweden.

After all, that’s how it works in Denmark and Germany. But it’s already clear that the Swedish Energy Agency firmly opposes the idea of changing market conditions for offshore wind development. It’s hard to understand this opposition given the Government is targeting 100 per cent renewable electricity generation by 2040.

Because the Swedish Energy Agency reports lack any comments or input from offshore wind power developers in Sweden, we decided to ask for their opinions. We were interested in what the market thinks about the investigation and the Agency’s peculiar approach to focus on problems instead of solutions.

Offshore wind is not happening in Sweden

Sweden has good conditions for wind power, both on land and at sea. The global offshore wind power market is growing rapidly, especially in Denmark, Germany, the Netherlands and the UK. In Sweden, little has happened since 2013 when the small offshore wind farm Kårehamn (48MW) was commissioned. The project is a success in terms of technical performance, but it’s unlikely to ever be a profitable investment. The same goes for Lillgrund, the largest Swedish wind farm, built more than 10 years ago.

On the other hand, the technical development has been tremendous the last couple of years. The CEO of OX2 Wind, Paul Stormoen, claims that the best offshore wind projects under development are better than the worst projects onshore - even with connection fees. This shows that removing connection charges would give a big boost to offshore wind in Sweden. This in turn benefits the national electrical system, especially when the first nuclear reactors are decommissioned.

In a press release, the Minister for Energy, Ibrahim Baylan, says: "Offshore-based wind power is part of achieving the target of one hundred percent renewable electricity generation in Sweden by 2040. Ocean-based wind power produces evener power generation and often has greater acceptance among locals than land-based wind power, which are clear benefits.”

In addition, the expansion of offshore wind power along southern Sweden's coasts has the advantage that it is close to areas with high electricity consumption and where there is currently a deficit in production capacity.

The Swedish Energy Agency did look at two different models in their first report. However, they argued against removing connection fees when outlining both models.

The first model looked at moving the grid connection point to the wind farm. This would make Svenska Kraftnät responsible for planning, building and operating the connection cable, and thus for all costs. To finance this, Svenska Kraftnät would charge higher tariffs to all. However, the model does not create an equivalent relationship with land-based wind power, leaving them and other power generation plants to pay their connection costs.

The Agency’s assessment also says there will be no incentive for wind power producers to choose locations that provide cost-effective connections if they do not have to pay fees. A cost estimate for the first model showed a span between SEK 0.8 and 1.1 billion per TWh of offshore wind power.

The second model suggests introducing aid for the wind power producer to cover the cost of the sea cable and associated transformers. This creates more equal conditions with land-based wind power. Another advantage of the model, according to the Agency, is that while the total costs are heavily reduced, there is still incentive to choose locations that provide cost-effective connections. The aid would be financed by a special fee levied from all electricity consumers.

Focus on solutions instead of anticipated problems

A common view from the offshore wind developers that we talked to is that all the problems raised by the Agency are solvable. And further offshore wind power in Swedish waters will be needed to reach the target of 100 per cent renewable electricity generation by 2040.

The developers we talked to say it is crucial to decrease the total investment needed to achieve profitability in the offshore wind farms. Although it would be enough if the transmission cable and transformer station are paid for.

Göran Loman at Vattenfall thinks the Swedish Energy Agency has chosen to focus on anticipated problems instead of solutions and can’t understand the negative attitude. “They have perceived the assignment incorrectly”, says Loman.

Göran see a large risk of their company shutting down the development of offshore wind power in Sweden due to the Energy Agreement not being fulfilled. “In practice, Swedish offshore wind competes for the money as the foreign offshore wind”, he clarifies.

The developers, and PA Consulting, would welcome a new investigation focusing on the solutions. We know offshore wind will be an important part of the future Swedish electricity mix.

¹ The removal of the connection fees for offshore wind power is part of the Energy Agreement, signed by the Social Democrats, the Moderates, the Green Party, the Center Party and the Christian Democrats in 2016, which constitute a long-term plan for Swedish energy policy 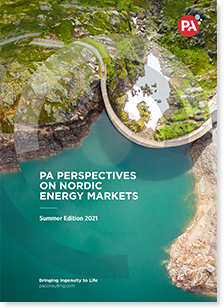 Explore our latest insight and perspectives on the Nordic Energy market

Re-thinking Corporate Services in an uncertain world: How the back office can be adaptable to uncertainty and change

To achieve breakthrough innovation, embrace a new way to lead

Fearless leaders adapt to change, driving breakthrough innovation across their organisation by embracing a new way to lead.
Insight

Time to re-evaluate your learning function?

Innovating for growth: how to join the Breakthrough Brigade